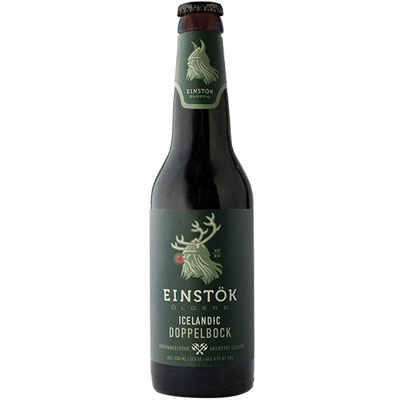 Reactions and Insights
I like it because it’s got a weaker flavor than most Doppelbocks. It’s got a nice graininess about it, it isn’t too malty, and it’s somewhat watery. It also has a nice mouthfeel, which is a dumb word. But it does, and that’s rare in many beers. All of this makes it very easy to drink.

Would I drink a case of it?
As usual, no.

OK, but would I drink a six-pack of it?
Yeah, I might. It’d be a great beer to bring to a holiday party.

Did it contribute to my holiday spirit?
I am writing this while drinking it and looking at my Christmas tree as the sun starts to set on a snow-cloudy day. Yes. 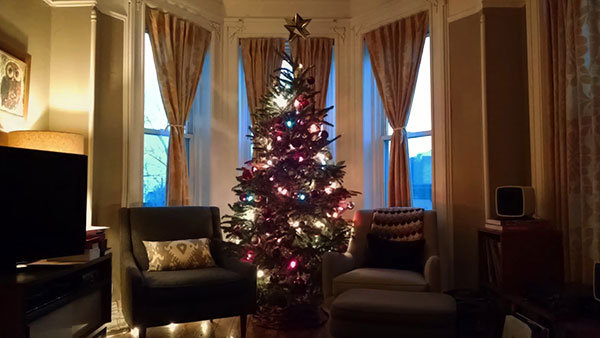 Label Notes
It’s a stylishly cute logo. I just noticed that the logo uses Museo, a very of-the-moment font that’s working nicely with the other elements. Good trendy fonts can make you feel excited to be alive. Also the label wrapper has a nice construction papery quality. 9/10 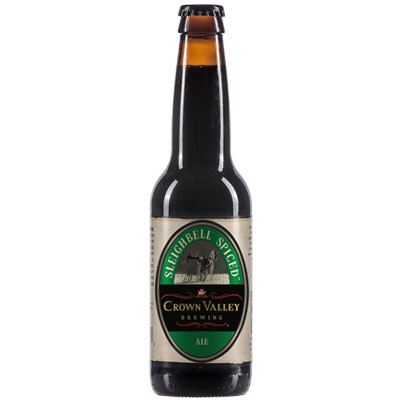 Reactions and Insights
Yikes, a lot going on here. It hits you with sourness, then come the herbs and spices. It took me a few minutes to warm up to it, but once I did, it was fun.

Would I drink a case of it?
No, it’s too specialized.

OK, but would I drink a six-pack of it?
Probably not, but I wouldn’t be annoyed if someone brought one over to share.

Did it contribute to my holiday spirit?
Yes, because it’s very much a holiday beer and because of Christmas Angel. A little girl lives with her single mom. The mom works at a bakery and loves college football. The girl just wants her mom to find a husband but the mom thinks it’s realistic not to expect to ever find one. Meanwhile, a depressive (but attractive?-ish?) doctor with kind of gross floppy hair (UPDATE: Kevin Sorbo!) moves in to the abandoned house next door.

You’d think you could write what happens next, but you would forget to include the part about the aging chanteuse with throat cancer (spoiler alert: the angel!!) whom the doctor is secretly treating in his rundown house using a neck brace that emits an experimental blue light technology he invented. (The house also includes a pristine nursery for the baby the doctor always wanted.) An unethical freelance photographer looking for his big break threatens to ruin everything.

Aside from that, things pretty much go as expected.

There’s always so much to think about while watching Christmas movies:

There is a scene at the end in which everyone comes in from the snow and the snow never melts from their clothes or hair, so it looks like they’re all walking around with dandruff.

Label Notes
Another classy one. 8/10 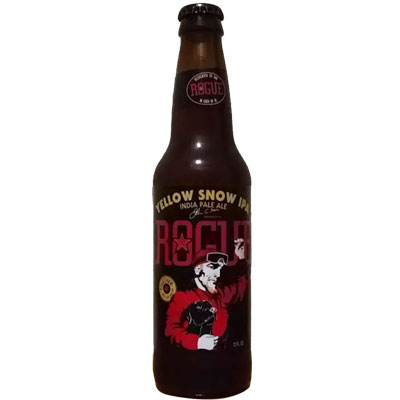 Reactions and Insights
YES. This is the stuff. A perfect amount of hops. It’s not as citrus-y as other IPAs, more woodsy, which helps make it feel like a winter IPA.

Would I drink a case of it?
Yes. It’s very good.

OK, but would I drink a six-pack of it?
Yeah. One time I had a six-pack of Rogue porter in my fridge and some people I didn’t know very well came over to hang out, and I offered the Rogue to someone and he was like, “You’ve got Rogue? Are you sure you want to give it to me?” As if beer by this brewery were some irreplaceable commodity  and/or as if he were unworthy of good beer. I was happy to have some stranger with low self-esteem whom I would never see again think I was especially generous.

Did it contribute to my holiday spirit?
It did! I was drinking it with the Christmas tree all lit up and writing other beer reviews while half-watching Christmas Angel on Netflix without shame. More on this in the next entry.

Label Notes
I don’t totally get the label. It’s of a guy looking at you, hugging a dog, and giving a fist pump. He has a yellow beard and is wearing a bomber jacket and eye goggles. Someone help me make sense of this.

This same guy is on other Rogue labels in different costumes, but that doesn’t really explain anything.

Design-wise, it’s nicely balanced, with good use of color. A skilled person made it. 8/10 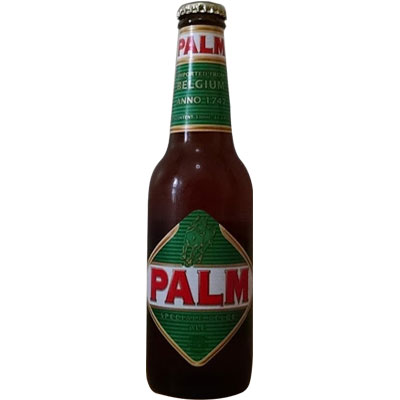 Reactions and Insights
Some people in my circle consider Palm to be a great beer. I can’t muster such strong positivity — it’s always struck me as bland — but it’s pleasant and reliable. And it’s certainly good choice for a holiday breather.

Would I drink a case of it?
Probably not.

OK, but would I drink a six-pack of it?
I’ve done it before and I may someday do it again.

Did it contribute to my holiday spirit?
Not really, no.

Label Notes
I am a huge fan of this label. It reminds me of an ’80s movie about Australia. Not any particular movie, just the concept of such a movie. 9/10 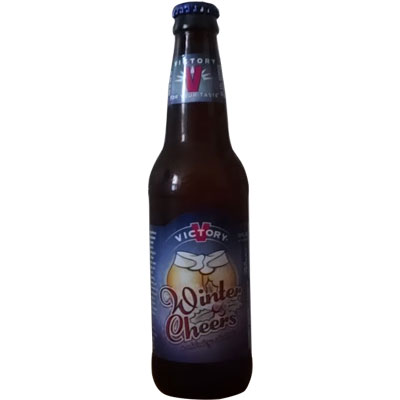 Reactions and Insights
I did not realize this was a Hefeweizen while I was drinking it. You would think I would have, what with the picture of two clinking Hefeweizens on the label.

I couldn’t quite make sense of what was weird about it — it had a bunch of Christmas elements (malt, cloves, sweetness) but it didn’t taste like a normal Christmas brew. Everyone on Beer Advocate is mentioning a banana taste. I drank it yesterday and want to be able to say that I tasted bananas, but I can’t remember bananas.

OK, but would I drink a six-pack of it?
Nah. This was one of my least favorite, actually, and I was surprised because I usually like everything from Victory. I’d give it another shot, though.

Did it contribute to my holiday spirit?
Mmmm… it did a little, because I kept seeing the phrase “Winter Cheers” whenever I reached for it.

Label Notes
I like it! It’s got a satisfying looseness about it. The illustration style (better image here) reminds me a little of Garfield with its dark brown outlines and soft radial gradients. 8/10 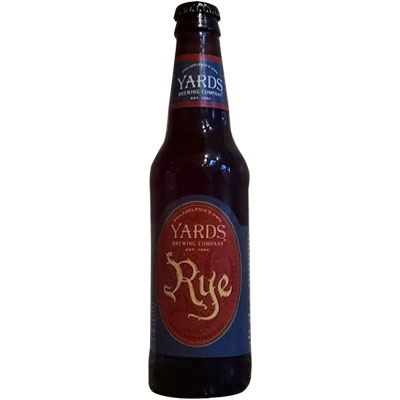 Reactions and Insights
I’m not big on “Rye PAs” because they’re maltier than regular IPAs. This is just fine but I just want to strip out some of the maltiness.

Would I drink a case of it?
Nup. (I’m trying to come up with new ways to say no.)

OK, but would I drink a six-pack of it?
Nootch.

Did it contribute to my holiday spirit?
I’ve been trying to catch up by drinking while I work, but it just makes me sleepy and unfocused and I have to reread my emails four times to make sure I’m not leaving out words or telling anyone I love them by accident. Anyway, this one didn’t bring holiday cheer, but that’s okay — there are 11 more to go!

Label Notes
It’s nice. The word Rye is rendered like it would be in an old storybook; the letters are branches, and behind them are stalks of barley. And I like the colors. I would like to have a front door in either that shade of red or blue. But it’s not totally coming together for me, just like the beer inside. 6/10 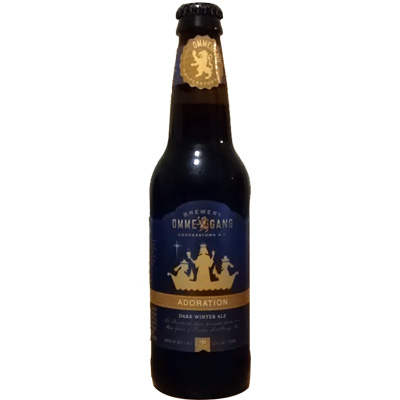 Reactions and Insights and Confessions
I’ve gone a little rogue with the calendar. My friend Steve helped me cart the beer from Philadelphia to NYC and I haven’t yet found time to retrieve the five beers he has (his apartment is 40 minutes away). So I’ve messed up the order. Chris didn’t want me to drink two Belgian Strong Dark Ales in a row, but I did. It went fine.

But I’m also behind! It’s hard to fit at-home drinking into my regularly scheduled holiday drinking.  There may need to be some guest entries, or some late-in-the-game speed drinking. We’ll see.

Anyway, Adoration Ale is good. I can tell it’s good. It’s spicy and flavorful, yet refined. It’s not a heavy hitter. But I’m just not into this style of beer.

OK, but would I drink a six-pack of it?
No. I meant to have another catch-up beer after this, but I found myself feeling very sleepy. 10%!

Did it contribute to my holiday spirit?
Yes. I watched an episode of Downton Abbey on PBS while I drank it, and the beer made the show a little better. I remember not minding the last season when it was new, but it was actually pretty bad, wasn’t it? I would like to propose that Mr. Bates die in an accident or get murdered.

Label Notes
It’s a tasteful, attractive label that says, to me, “Good beer for grown-ups.” I expect nothing less from Ommegang. 9/10 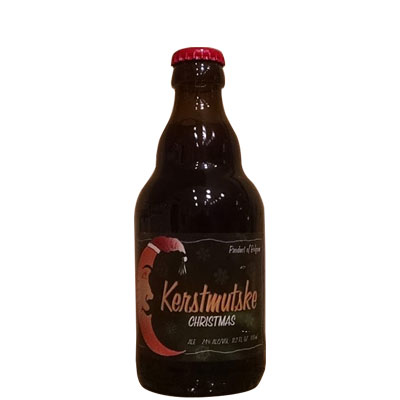 Reactions and Insights
Yup, a holiday beer, with molasses and coffee the way they do it. I was apparently supposed to drink it at the end of the evening, based on its name, but I instead made it a starter.

Would I drink a case of it?
No, and I can’t imagine who would, really. It’s only available during the holiday season so you’d need to be committed to this particular flavor.

OK, but would I drink a six-pack of it?
No, but it’s not bad. I drank it fast, partly because it was fun and partly because I wanted to move on to something else.

Did it contribute to my holiday spirit?
Yes! I drank it while celebrating Hanukkah with Andy’s family. Happy Hanukkah, Merry Christmas, good night!

Label Notes
It’s charming, with its moon sliver in a Santa cap and casual handwritten fonts. It feels like the sign on a local hardware store or some other mom and pop place you’re afraid is going to close. 7/10 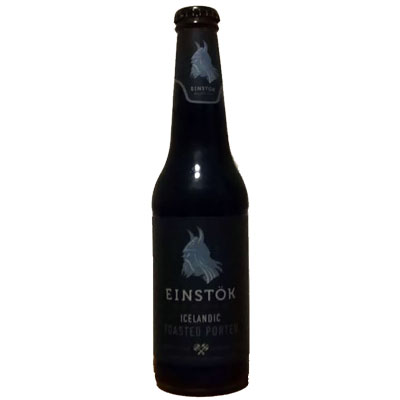 Reactions and Insights
Yum. A solid, chocolatey porter. Andy was into this one, too, so I generously gave him a very small glass of it.

Would I drink a case of it?
Porters are not my go-to thing, even though I like them a lot. If I were someone who took a drink with me to bed, I would take scotch. But if I were to take beer to bed, it would be porter or milk stout because they’re comforting and sleep-inducing. Anyway, to answer the question, no.

OK, but would I drink a six-pack of it?
Yeah, I would. This gift is making me think about what my ideal beer supply would be. Porter should definitely be represented and this is a good one.

Did it contribute to my holiday spirit?
It sure did. I drank it while decorating the Christmas tree. Its mellow, dark flavor was a nice complement to the Oscar Peterson Christmas record.

Label Notes
Spare and clean and vikinged, evocative of my impressions of Iceland. 8/10 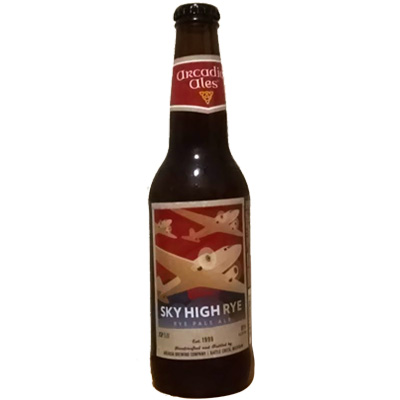 Reactions and Insights
I think this was added as a break from all the holiday ales. Thanks, Chris. It’s a very standard, reliable rye pale ale, with a bitter beginning and a fruity end. It’s a little more bitter than I’d prefer, but it’s very drinkable.

Would I drink a case of it?
If it were part of a variety pack, maybe.

OK, but would I drink a six-pack of it?
Sure, but it would be a six-pack someone else brought over on movie night.

Did it contribute to my holiday spirit?
No, and I didn’t expect it to.

Label Notes
It is a pretty direct ripoff of this 1937 poster. I like the style but I can’t condone the plagiarism. No grade.