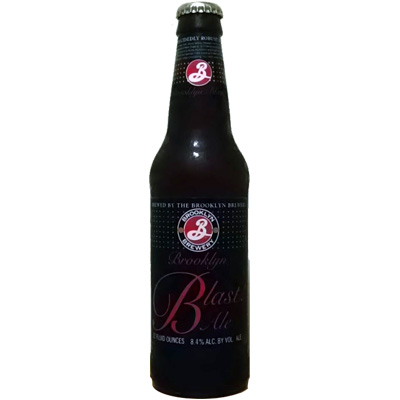 Reactions and Insights
First impression: Oh, it’s such a Brooklyn Brewery beer, that’s so cute. I know that’s condescending in an “aw, grandmothers” kind of way, but the brewery couldn’t hear me think it, so it’s okay. It’s just got that extra flavor thing that says “Brooklyn Brewery.” I can’t describe it. It’s just some extra little flavor.

Second impression: Holy crap, this is GOOD. And it keeps getting better as you drink it, because you keep getting more intoxicated, because it’s 8.4%.

Would I drink a case of it?
Yeah… but I wouldn’t buy a case of it, because I’d be getting drunk every night.

OK, but would I drink a six-pack of it?
Mmhmm.

Did it contribute to my holiday spirit?
No, mostly because I’ve gotten sucked in to watching/listening to many episodes of Comedians in Cars Getting Coffee. The Alec Baldwin one is particularly good.

But I’m listening to the Tina Fey one right now, and she asks Jerry where his kids “are” with Christmas, like do they believe in Santa, and he says, “Well, we’re Jewish,” but then he starts talking about how he was obsessed with Christmas trees as a kid, and I’m planning to get a Christmas tree tonight.

The Tina Fey one is good, too.

Label Notes
Very classay. One of the very first websites I worked on in 2000 used the same cursive font. It was for a financial firm in Manhattan. Those were different times.

Does Jerry own all of these cars? Does he own like a hundred cars?

UPDATE: I think the cars are borrowed.